the train to Florence... 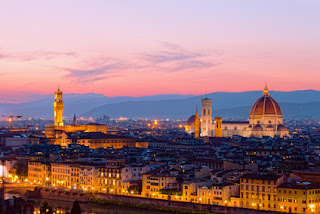 "The shore is safer but I love to buffet the sea -- I can count the bitter wrecks in these pleasant waters and hear the murmuring winds, but oh, I love the danger!
--Emily Dickinson

Life offers many opportunities to "buffet the sea". Several years ago, I wanted to get back to traveling again in Europe. I had done some with my former husband several decades ago. This time I would do it alone. Venice and Florence were my first destinations. History, architecture and art where the draw. Arriving at the Rialto Bridge (built 450 AD), I spent an enchanted week in Venice.

Florence, next. A day earlier, I scout-out the train station, buy a ticket and check which of the twenty-one tracks my train leaves from. Next day, with ticket and luggage I head for the station.

One imperative, I must arrive in Florence while it is still light as spotting the Basilica dome (Cathedral of Santa Maria del Fiore) against the skyline is to be the beacon. My hotel is on a little street, one block away.  Good walking shoes are required as the city center only has a few taxis.

Travelling alone, details are important. There is no one to call within an ocean's distance. I arrive a hour and half early and retrace my practice-run the day before. My train pulls in. Yes, track 19. The crowd rushes forward and me with it. Seated and relieved I enjoy the country-side at it flashes by. The gauge at the head of the car says 275 to 290 km's an hour.

Forty-five minutes later the conductor arrives to punch my ticket. He pauses, scowls, I hear, "Out, out," the rest is in Italian. What does he mean, "Out, out"? We are in the country-side. Then he points to a little box of a station that may have been open during WWII but certainly not now! Windows are boarded.  Looming, he commands, "Back, back," then, "Venice". He points to my luggage and reaches for the chord.

Within five minutes, my luggage and I watch the back of the train, shrink. I am so lost.  Should I cry or start walking? The latter holds more hope. Crossing five or six tracks, passing the little station, I head down a dirt road which is tough on luggage wheels and praying to see a human who speaks English. I spot an old man and show him my ticket. He points to a building down the road. Again, no English yet the clerk sells tickets but not to Florence.  I buy one for Venice. What else to do?

Finally, arriving back to my starting point, I find a ticket agent who speaks English. I had to restrain myself from jumping over the counter and hugging her. My third ticket of the day and I am still in Venice. Now, it is mid afternoon instead of early morning. Again, I find the train and settle in. As it begins to move, another passenger arrives and ask to see my ticket. Wrong seat, wrong compartment, wrong car but at least the right train, I think. He looks at my luggage, nods and smiles. I thank him for his generosity. I have a seat.

An hour later the train stops. Country-side again and the light is fading.  Some passer tells me the train just hit and killed a man. We are waiting for the police. People pile out. I keep my "nice-guy" seat. A couple of hours and we are on our way again. I won't make Florence in the light.

Finally, Florence, the train slows for a stop. I show my ticket to the woman next to me. She knows a little English. This ticket is not for Florence but a station outside the city. The ticket agent has sold me short. Now, I have to get off, find out where to buy a bus ticket, etc. Not an easy task.

An hour later, I finally arrive at my beacon point, the Firenze Santa Maria Novella, Florence's main train station. The sky is indeed dark and has been for hours. Yet there against the sky line is the Basilica. Old Florence has many little streets without much lighting. Now, just one foot in front of the other. Entering the lobby of my little four-star hotel, I raise my arms and announce to all, "I have arrived."

The clerk, looking uncomfortable, informs me I cannot stay as they have had an emergency and have booked a room for me "not far and an easy walk". Experience tells me, the latter statement rarely proves true. A half hour later, the buildings through the dark little streets are looking seedier. Finally I see it. The glass is broken on the sign. No, choice, I have to go in. The lobby is three flights up. (My hotel must have been desperate.) The clerk shows me to my room. "Do not touch anything," goes a voice in my head. With clothes on, I fall on top of the covers and am instantly asleep.

Next morning and the sun is shining. I make my way back to my hotel. Instead of the assigned room on the second floor, I ask for one on the top floor as was recommended by the web site, Trip Advisor. Entering the room, one wall is open to the roof gardens, tea-tables and chairs. Yet, what surprises me is the bed spread of red roses. Instantly, it shouts my mother's favorite of all flowers. I don't believe in coincidence. A breeze freshens the room.

Two hours and a shower later, I am standing among the Renaissance masters, Botticelli, Michelangelo, Leonardo da Vinci, Raffaello, etc.-- surrounded by magnificent paintings and sculptures in the great Uffizi Gallery. I breathe in a thrill of thrills.

As Dickinson muses, "The shore is safer but I love to buffet the sea..." The train to Florence, indeed, buffeted me and I didn't like it: wrong train, wrong ticket, wrong seat, wrong compartment, wrong car, wrong ticket again, wrong station again and wrong hotel. Plus, the night walk through those little, dark streets at mid-night, I suspect, held their dangers.

Yet, thankfully, storms do not go on forever, seas calm and the sun returns. The travel to Florence held a bitter taste. Yet it got me there. That week, I explored the heart of Florence, ate looking over the Tuscany hills and met interesting people. Each morning, I woke to the bells of the Basilica tolling and then calling me to presence periodically through out the day.

I suspect, we each can count the bitter wrecks, be they travel or other. Yet, there are always those murmuring winds to hear which keep one praying, recognizing 'coincidences' and feeling that seemingly invisible help that is always, always there.

Photo resource: fotolia.com
Note: A week later I had a seamless trip back to Venice (to catch my flight home).
Posted by Augusta at 12:00 PM