Keeping my eyes on the hawk... 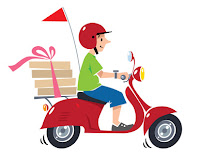 Life is not a journey to the grave with the intention of arriving safely in a pretty and well preserved body, but rather to skid in broadside, thoroughly used up, totally worn out, and loudly proclaiming – "WOW – What a Ride!"

~Author unknown
The grim woman at the vehicle department states: "No, you can't license your scooter until you have a motorcycle license".
"What? I don't want a motorcycle license." Back home in Nova Scotia the only motorcycle people I hear about are the "Hell's Angels." And several of them are on trial for murder. Besides, I'm sixty-two years old.
"Well, you won't be riding your scooter in Arizona then." Her set lips end the argument.

In the early years, spending the winter months in the southwest, I only had a bicycle with which to get groceries. After several years of growing leg muscles, plus wanting to be more mobile, I decided to buy a scooter. The adventure was turning out to be more than I first thought.

Now I have to take this motorcycle course I don't want. Two weeks later and twenty miles out in the desert, I wait before the gate titled, "Stock Car Racing." It's desert cold and six-thirty a.m. The sun is just coming up, back-lighting the saguaro cactus. Instructors and students are beginning to arrive. Soon eleven throbbing motorcycles line the track. My heart thumps like those cold machines missing a beat and needing the throttle.

The instructor introduces himself as "Dan, the Man." Really! He asks, "Who has not ridden before?"  Mine is the lone hand. Yet seeing several women, although decades younger in the group, comforts me. One of them leans over and whispers, "They say he was once an instructor in the Marines." She looks thirty years younger yet appears as vulnerable as I feel.

The instructor points me to a Kawasaki 350. Then the command, "Mount". I swing my leg from right to left. "Hey you, mount from the other side." I try again. He continues pointing out what seems to be obvious to the others: starter, safety starter, foot brake, hand brake, throttle, gas, foot clutch and hand clutch. "Now," he announces, "You are ready to ride." Does he think I’m going to remember all that in two minutes time while balancing this thing five times above my weight? He does.

Being in the middle of the pack, the sounds of eleven revving motorcycle engines assault me. I timidly attempt a "rev" or two. It works! I creep with considerable wobble out of my stall. One foot up, kick it into first, whoops, it jumps ahead. Brake, where is that brake? The guy in line in front of me is coming up fast.

After a day of riding and two hours of classroom work, I am exhausted, defeated, knowing I am going to fail -- no matter how much I need that scooter for groceries. Besides it's dangerous! One rider hit the hand brake before the foot break sending her half over the handle bars this morning. The motorcycle twisted somehow landing on top of her. A bad spill. She could not move for awhile and then had to be helped off the track. I am glad my kids can't see this. Another went down doing the figure-eight. Now, surviving the course without physical injury is my goal, not passing!

During the first day Dan kept telling us, "Don't look down at the track or you will follow your eyes and land on it." To this beginner not looking down at where the wheels are going is next to taking my hands off the handle bars. Then I spot a hawk hovering eye-level at the end of the track. OK, I am not taking my eyes off that hawk.

Three days later, grading day. I have survived the machine, the clutches, brakes, the two-by-fours and figure-eights on the obstacle course. Numerous red cones dot the grading track ahead. Dan informs us, "If you go down once you fail the course." His arm goes up, the snap of his timer makes me jump. First two riders make it through, some cones topple. The third person, an experienced rider, is down in the figure-eight. "You're out." yells Dan pointing to the side of the track. Throughout the course it was this rider's confidence I wished I had.

My turn. Rivulets of sweat tickle my cheek. Several hawks swoop and hover just beyond the track. My hands are glove-clammy. If only I can keep my eye on those hawks. The instructor's hand goes up. I gun the machine. No time for wobbling. In and out of the red cones.  Dead ahead is the tight figure-eight, seemingly the size of a postage stamp. Can I wrap this machine around it without falling?

The exam is over. The motorcycles, minus riders, are lined colorfully on the sand. Mine is red. Seven of us stand next to them waiting in anticipation, the other four have not made it. Dan checks his clipboard. The first two guys pass. Another fails. I am next. With a little (possible) smirk he ask, "Augusta, how do you think you made out." The question surprises me. He didn't ask anyone else that.

After a pause, I answer, "I don't know." Several (possible) snickers from the others.
"Why don't you?" He shoots back.
"Because you told us never to look down." Pointing to the desert I tell him, "I kept my eyes on the hawks. So I have no idea how many cones I knocked down or how many lines I crossed."
He laughs, "Congratulations Augusta, you not only passed you came in the upper half of the class."
And, this news I am sure, not only shocks me!

The course is over. Thank goodness. Yet, as I am leaving the track I feel disappointed. Why am I going home to a scooter? I want a red motorcycle.