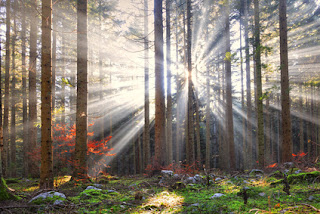 A reader who is losing a very special person asked me the other day how he can prepare himself. Those that part from us due to sickness, geography or even death leave a soul absence. Of course, there really is no answer to the reader's question, no balm of gilead, no substitute, no pseudo relationship to fill the gap. Soul has met soul and that is an eternal.

So how to respond? I posed the question to a wise woman. She asked me if I remembered the movie Castaway a few years back. Tom Hank's character is marooned on an island. To cope with the isolation and loniliness he makes a face with his blood on a volleyball that had also washed ashore from the plane crash. Being desperate for companionship, he begins to talk to the ball and names it Wilson. Over time, Wilson becomes his friend, guide and confidante.

Nothing has power on its own unless we are related to it until we give it life and until we bring our life to it. Then it becomes a vital force be it a parchment, a close friend or a "spiritual guide". My wise friend continued, "No matter how many people are in your reader's life or are not, he would do well to find and relate to a "Wilson." After all, we can be lonely in a crowd and soul absent in a marriage."

In the fourth year, Tom's character builds a raft and secures Wilson up front. A storm comes, the ball breaks loose and drifts away. When he sees his companion in the distance he jumps in the ocean but the currents have their way. Devastated, he cries Wilson's name over and over as his beloved friend drifts out of sight.

Apparently, these months spent filming had also imprinted Tom Hanks, himself. The New York Times and the UK's, Daily Mail wrote about his being emotionally re-united with "his beloved Wilson" at a New York Ranger's game "on Wednesday." Apparently, Mr. Hanks frowned a bit when spotted in the crowd until someone handed him a volleyball looking very similar to Wilson. The Daily Mail said he couldn't hide his delight once he recognized his former cast mate and turned the ball around to show the packed stadium, joyfully exclaiming, "It's Wilson, It's Wilson." And this is fourteen years later and many a good movie after that one.

My "Wilson" developed more or less by accident in the middle of community and soul friends.  She was given to me by a friend a couple of decades ago. At first, she was just a foot high paper-mache figure. They can be bought for a few dollars at any market here in Tucson, although this one came from Mexico. For some (long forgotten) reason, I set her where I meditated. She gradually became a presence standing there in her silence. I eventually named her the Desert Woman.

One evening, her neutral face caught my attention. I crooked my head this way and that. Was it just me, my mind or did she have a hint of a smile?  Several weeks before leaving for Tucson, shortly after I was given her, and with no thought of the Desert Woman, I asked a friend who sees beyond the ordinary how my time would be in Tucson. And there (in her mind's eye) was the Desert Woman with a suitcase packed and ready to go! We both broke up laughing. Since then, she has made every trip to and from Tucson in a shoe box which often takes up much-needed space in my carry-on luggage.

Spirituality, life and soul do wait for us to relate in all sorts of forms. If we will meet life, life will meet us anywhere and everywhere. Life itself has its own heart, its own intelligence independent of me. Sometimes it shines a brightness and other times I find myself arguing with it as Tom's character did with Wilson. One can give life to depression, to negativity, why not to a "Wilson"?

Shamans, Christian mystics, Indian yogis, Tibetian monks and the quantum physicists know that "God" (they may not use the Christian term) is an everything "God". The sacred is not separate, not up there or out there detached from material form. We are never alone, we really are not.  What matters is where I am, how am I relating and where I am coming from.

My wise woman continued, "Find that special Wilson. Put on a coat, go out and consciously look. There is a way sometimes that something resonates that will attract you -- it will appear. Go out and bring it home, find the feeling so it can develop. Then when talking to whatever -- allow its largeness and it will become a heart. Your reader may even catch himself at times wonder who or what is talking back. Remember, Tom and Wilson had great arguments."


And why not, are we not creators of life? Yes, I will tend to my "Wilson", be it a book, a monk's garment or this mesquite tree with its chorus of bird-song this morning.
Ah, is the Desert Woman smiling?  I just looked up -- yes, she is.
Posted by Augusta at 7:06 PM