Are you in the wind? 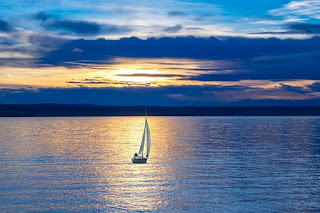 My Ex made his crossing Sunday gently and normally. One minute he was breathing and the next he was not. His wife was with him and then our children, myself, and hers arrived minutes after. We had held the watch and his younger sister took the nights for his last few days. He was never left alone.

Sitting at his bedside I thought, "Your presence, your love, and your wit were stronger and met us at every turn in spite of a label called dementia. You've been with us through it all. And now leaving your body, it is time or almost past time, almost."

Love seemed to saturate the room, yet I found myself thinking, "But you are so obviously not here." I kept feeling myself out. Yes, at least a million memories, at least. And no matter we were divorced after being joined for decades as life grows its issues but they were not soul issues, or integrity, nor love issues. And, we have been indeed blessed since with decades of caring.

Later in the afternoon, the minister gathered us around the bed for prayer, his wife on one side of his body and me on the other. In joining our hands, I reached for his wife's hand and she for mine. I don't know how it happened but we each took one of his. It was still warm. The circle was joined and we bowed our heads.

Next morning and waiting for one of our sons to arrive at Cora's for a very early breakfast, I step out of the car into the wind, its freshness, its chill. I love the wind, it often speaks to me. Thus, I had to ask, "Are you in the wind, my love?"  As if alive with force and presence, a gust tips me back on my heels. I laugh at the possibilities and feel connected in this simple mystery we call wind.

An ancient friend years ago, when hearing me dismiss the wind as merely wind, reflected quietly with compassion, "Ah, and you think of it only as wind." Now I needed to ask, "How come you are so present here in the parking lot, so here in the wind, more so than when you were alive and living twenty miles down the road? How come I feel elated, but the question is, can I trust it? I feel happy. Can I trust that? I don't understand. This is like walking on thin ice and I don't know when I will go under. I expect to feel hollow lostness, a bleakness but it is just not there. Should I feel guilty? No, it's definitely happiness."

Rabindranath Tagor, who I have mentioned before, wrote a poem in the Gitanjali after his beloved wife, daughter, and best friend had died within months of each other. Mourning his loss, he went up to the mountains for months by himself. From there he wrote, "Light, my light, eye kissing light, heart sweetening light, the dances my darling at the center of my life, the light strikes my darling the chords of my heart, the skies open, the winds run wild, and laughter passes over the earth."  I have wondered for years how could he feel such a heart sweetening light after such loss?

Now, somewhere in my awareness, I must have arrived at a new point. I get it. At least enough to say,  "Maybe you, who left your body yesterday are more in your essence, your greater understanding in your here-ness, now. This has nothing to do with belief, this I am experiencing.

"So, yes my love, I do feel you in the wind. You are as free as the wind in the Bay we brought our children up on. How can I not be happy, you gem of a man?"