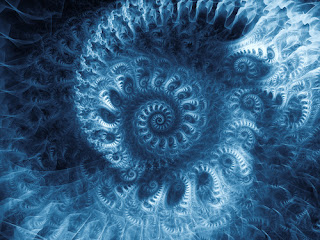 For life and death are one,
even as the river and the sea are one.
Kahlil Gibran

My doctor turns and looks at me, without any prior conversation or thought, at least on my part, he asks, "Do you think death has to be morbid?" The question is so sudden and seemingly out of context, it shocks me.

Having more wrinkles than I might like, having said a good-bye to most of the people of my younger years, I am glad he asks the question. My doctor works in many countries so I am sure he has his reasons. I look at him saying, "No, death need not be morbid. Because there is no death." We discuss it, then driving home I pondered it further.

My first encounter of aliveness, after what I thought was death, I have written about a few years back in this blog.* If anyone had died a morbid death it was my father. I was in my twenties. He was fifty-seven. His suffering was a darkness for him and us that lasted months. No light at the end of that tunnel or so I thought. Yet, coming home from the grave, relieved and thanking God it was over, I headed upstairs and was stopped on the first step. There was my father, healthy, whole, and standing looking directly at me, laughing. So much so it was catching. He stayed and I looked. He was more alive and free than I had ever seen him. That was the day in 1968, I first second-guessed death.

About twenty years later, my ancient, spirit friend, the cottage woman, kept correcting me every time I said the word death. She would always respond, "Death is change, a transition, a continuation of living, of life. There is no death as you humans use the word." Then added kindly, "We do not use the word and suggest you don't either." So I try not to.

The cottage woman also allowed me a look at times. I had a dear, older, friend who had a great faith that was challenged by her family which disturbed her. When she died I asked the cottage woman how she was doing. She said, after a pause, "A lot of energy. Very happy. Ah, yah, like a kid in a candy store. She received a lot of what she was seeking in her time on earth -- indeed, like a kid in a candy store."** Maybe a somewhat irreverent observation but, nevertheless, an answer full of joy, aliveness, and a certain sweetness.

The invisible does not have to be visible to be real. Life and death are doorways to another reality, to other possibilities, and other dimensions. The ancients, the enlighteners, and the quantum physicists know that all is energy. The wind blows because the leaves move, we know about virtual reality now, you press a button and are looking at a half dozen people in your living room, and flick a little switch on the wall then poof, fire in my fireplace, or the room lights up. A hundred years ago,  fifty years ago, we humans would have said, "No no, only visible life is real, only what I can see, and physical touch is real."

Life is a kaleidoscope of dimensions, levels, planes, and realities -- and death, I believe is, too. We have been too quick in dismissing what is not visible to our human eyes.

* Also referred to in my first book, Moments That Blink Back (Amazon and in major book stores)
** From the book, The Cottage Woman which is being published later this year or early next.